"For fans of musicians such as Jewel and Tori Amos, Behind the Curtain is definitely an album to add 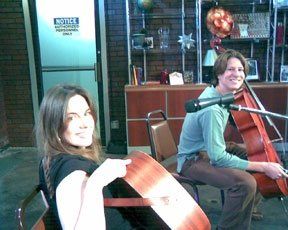 Through a sequence of chance encounters, the trio behind Havilah Tower joined forces in 2005, and

they have been writing music and playing as a group ever since. Behind the Curtain is their second

full-length release as a group. The trio shares a delight in taking part in enlightening conversations, which

their music. Much of this album is centered on the subject of finding sure footing and comfort with

yourself as a person and through the roads you end up traveling within life.

The lead vocals and acoustic guitar work are provided by Havilah Tower, the djembe drum by Steve

Perkins, and the cello by Chris Wright. Tower’s vocals, which possess the same soft lightness as

other female vocalist such as Jewel, are such that they will lull you into a mellow mood or into a

contemplative disposition without much notice. Their music is described as “Class Acoustic.” Simply

put, these are acoustic tracks with a singer/songwriter core and a subtle twist supplied by the djembe

drum and cello that convey a sense of classical elegance. This is seen especially well a little later in

the album with “Love Will Conquer You,” where the cello takes center stage.

The album opens with the soothing sound of rain in “The Truth Is,” an appropriate way to introduce

of melodic structure, while the acoustic guitar and djembe drum create a blanket of background

instrumentation to further fill out the album’s sound. The track that serves as inspiration for the

album’s title, “Behind the Curtain,” stands out for Havilah’s vocal choices and the boppy melody

that develops from that. The cello is put on display yet again when this song features a cello solo

near the track’s end. “The Promise” appears next, and although the song details the end of a couple’s

relationship, the trio manages to allow it to remain unique with their lyrical talent. The couple has

gone years without speaking with each other; however, they never truly manage to get over each

other – the struggle put on display with this track. Because of its incredibly infectious melody,

“Stones” is by far the most memorable track on the album. For the first and only time on the release,

the song contains male background vocals. It happens to be a style that works as equally well as the

rest of the album for the trio’s sound.

The release is composed of a total of 12 tracks, all of which have the potential for listeners to benefit

in some way or another from them, whether it be through the melody, the lyrics, or through the track

as a whole. Although none of the tracks on Behind the Curtain ever really falls short, there are a few

songs that stand out more than others. These songs include “The Promise,” “Stones,” “I Luv 2 B Z

and there throughout, such as in “Stones” and “Where Rainbow Meets Road.” Although Tower’s

powerful voice plays an incredibly important role in the quality of the album, the instrumentation

plays an equally as important role. For fans of musicians such as Jewel and Tori Amos, Behind the

Curtain is definitely an album to add to your playlist.

Album: Behind the Curtain